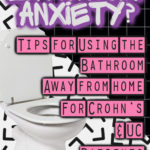 Bathroom Anxiety: Tips for Using A Toilet Away from Home 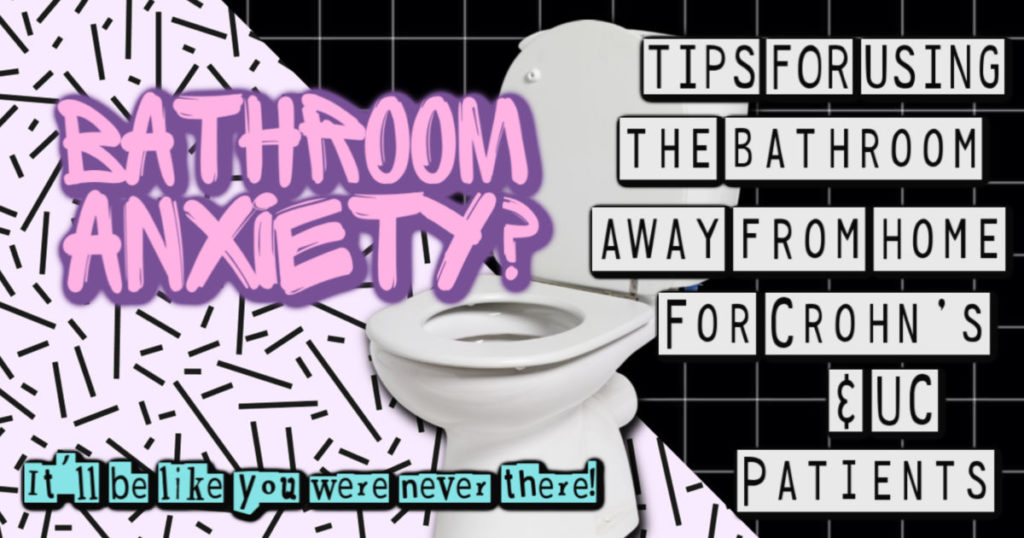 For many people who have Crohn’s disease and ulcerative colitis using the bathroom away from home can create a lot of anxiety. The mind races with worst case scenarios of all the things that could potentially go wrong when using someone else’s bathroom.

What if you just keep having to go to the bathroom? Over and over again. I mean, that's pretty much what it's been like lately for you

do if the toilet clogs and there is no plunger to be found? For the love of goggles you can’t ASK them for one! They’ll know for sure that you’ve really fucked it up in there. How on God’s green earth will you ever walk out of there and face them again?

So many of us really do think ourselves into an anxious ball of worry over this. The anxiety associated with using an unfamiliar bathroom can become so intense that it can cause patients with IBD to isolate themselves. This anxiety can ‘take over’ and seriously disrupt your life and therefore can decrease your quality of life by causing you to miss out on things you would really like to do.

I’d like you to know that you’re not alone. I’m not only President of the Bathroom Anxiety Club; I’m also a client (I’ll feel really stupid if you don’t get that joke). The anxiety you have is there for a reason and your feelings are valid. There is a lot of unpredictability with IBD. There are way too many times when your own bodily functions are not under your control which can be both scary and humiliating. You’ve probably already gone through a bunch of embarrassing situations that only fuel the anxiety fire. Please know I get that. I’ve been living with Crohn’s disease since I was a kid and I’ve walked that walk and still continue to do so. I won’t sit here and tell you this isn’t something that I no longer deal with because I still have to work at it. I can say with confidence though that I have reduced my anxiety a huge amount and that it’s very rare for me to isolate myself because of the fear of using a bathroom outside of my own home.

Preventing Bathroom "Mishaps": Tips for Using the Bathroom in an Uncomfortable Situation

The following tips and tricks come from myself and from friends of mine who have Inflammatory Bowel Disease. You can click on the images in order to view them in a larger size. 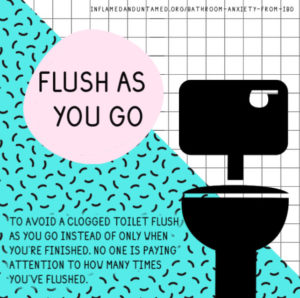 Poop, flush, wipe flush: Avoid a clogged toilet that might end up overflowing by flushing as you go. It’s pretty straight forward – go to the bathroom and flush, then wipe and clean up and flush. You may have to flush a few times as you go depending on whatever the situation may be. Just keep an eye on the toilet and flush when things start looking iffy. I don’t really care anymore if someone notices that I flushed the toilet more than once. The chances that someone would even notice are very low and if they do notice then whatevs! 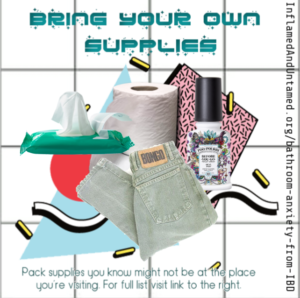 BYOS: Bring your own supplies. It probably goes without saying, but packing some items to help you handle the (un)expected situations that IBD throws your way is a no brainer. No one has to know if you do this discreetly enough. Pack items in a backpack or purse and bring them into the bathroom with you. Some items to consider bringing: Extra underwear, change of clothing, latex gloves, plastic bags, wet wipes, extra toilet paper (in case you wind up in a bathroom where it’s missing), matches, odor drops like poo-pouri to reduce scent, body cleansing cloths, etc. To see my “Shit Kit” infographic and read about what I think should be in one you can visit this post. 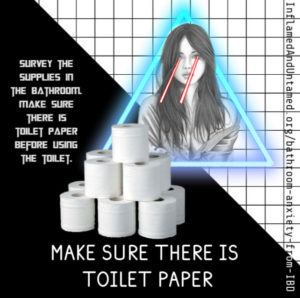 Survey the Bathroom: Take a quick look around the bathroom before you use it. Is there a plunger? Do they have wet wipes? Be sure to locate toilet paper and check to see where they keep more in case you’ll need it. If you can’t find the essentials but you followed the previous tip and brought your own supplies then you need not worry. 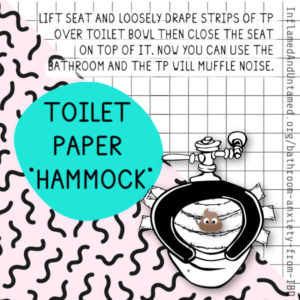 Create a “Toilet Paper Hammock” This is a recommendation that comes from a friend of mine at Camp Oasis. Lift the seat and drape strips of toilet paper across the toilet bowl loosely so they hang down into the bowl just above the water; kind of like a hammock. After that close the lid on top of them so they stay in place. Now you can sit down and do your business. This will help muffle noise when your “stuff” falls onto the toilet paper. I’ve never tried this trick myself but it came highly recommended. lol 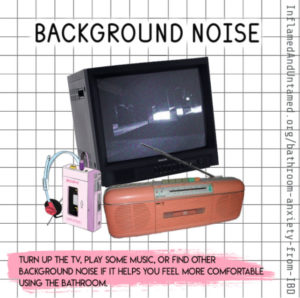 Background Noise: In my house we have what we call the “poop radio” in the bathroom. We turn it on when we want to because it’s just more comfortable that way sometimes. This may not work while at someone else’s house but turning on the TV can help if you are worried about someone hearing you use the bathroom and there are even noise apps you can download to your phone. I have always felt less anxious when there is some other noise nearby. Ideally all my friends would have super secluded bathrooms but that isn’t the case. Nothing worse than a bathroom right off of a quiet room where everyone is hanging out. 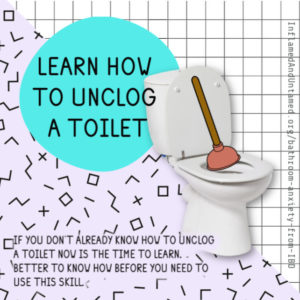 Learn how to properly unclog a toilet: This is a skill that you want to learn ahead of time before you actually need it. I actually just experienced an overflowing toilet for the first time a couple months ago. Plungers are gross, and fun! 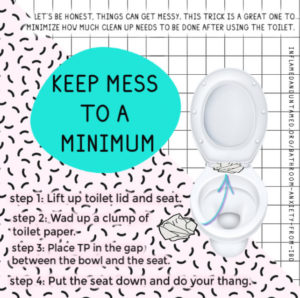 Less Mess, Less Stress: So it’s not pretty to talk about but sometimes it’s just reality – IBD can make a mess of a bathroom. Do NOT let this fuel a stereotype that IBD patients are gross and dirty. Far from it. My bathroom and my body is given special care and attention because of my disease and I’d imagine I’m neater than most people when it comes to the cleanliness of both my bathroom and my body. I love this trick. It’s hard to explain so click on the graphic to get an idea of what I’m talking about. If you put a small wad of toilet paper in this area it significantly reduces the clean up you will need to do to the toilet afterward. A lot of the splash back that ends up making a mess of the toilet and sometimes everything near it will not be able to travel to those places because it is being blocked and absorbed by the TP you put in this place. 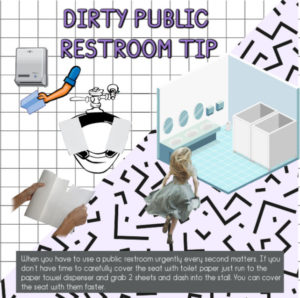 Public Restroom + Urgency Tip: Public toilets are almost always nasty but you have no choice but to use them sometimes. Every second matters when you have IBD and the urgency that can come with it. If you don’t have time to carefully cover the toilet seat with toilet paper you can grab a couple paper towels out of the dispenser and cover the seat with them a lot faster. Who cares if someone sees you; they don’t know you! Plus it’s not like they’ve never had to use a gross public toilet in a jiffy.

This is the reality of #IBD. It's unpredictable and often feels out of your control. Here are some tips for reducing bathroom anxiety and the isolation that comes from it. Click To Tweet

We Are Often Our Own Worst Enemies

Personally I can be very hard on myself. When I was younger I lived in isolation when my Crohn’s disease was at it’s worst because of the fear that I had about being away from home. The fear itself was justifiable; it came from real experiences that happened to me. I had urgency and accidents and there were times where I’d see nothing but bloody liquid bowel movements several times daily for weeks to months at a time. I didn’t do myself any favors though by hating myself so much for it. I had convinced myself that I was gross and no one would want me around because of what was going on. My internal dialect was extremely negative: I’m disgusting, I’m unlovable, I am repulsive.

I truly believe what helped my bathroom anxiety the most was just putting myself out there and realizing that the world didn’t come to an end when I was away from home and had some sort of bathroom emergency. Let me tell you there were a lot of embarrassing situations but with each one of them I saw that life went on and no one cared more than I did. Living with IBD was much more difficult when I was living with it alone. I isolated myself from a lot and didn’t talk to anyone about what was going on with me; not even on the internet. It helps to read the stories of others and to talk with people who have Crohn’s disease and ulcerative colitis. I hope that hearing my experience with this has helped you a little bit today.

Know that I care about so many of you and I want to make a positive difference in your lives. I don’t want you to feel alone; I’m here for you.

This post was edited on 04/28/2019 for grammar, clarity, and appearance as I transfer my site from Tumblr to WordPress.