J-Pouch Surgery: Was It Worth It? 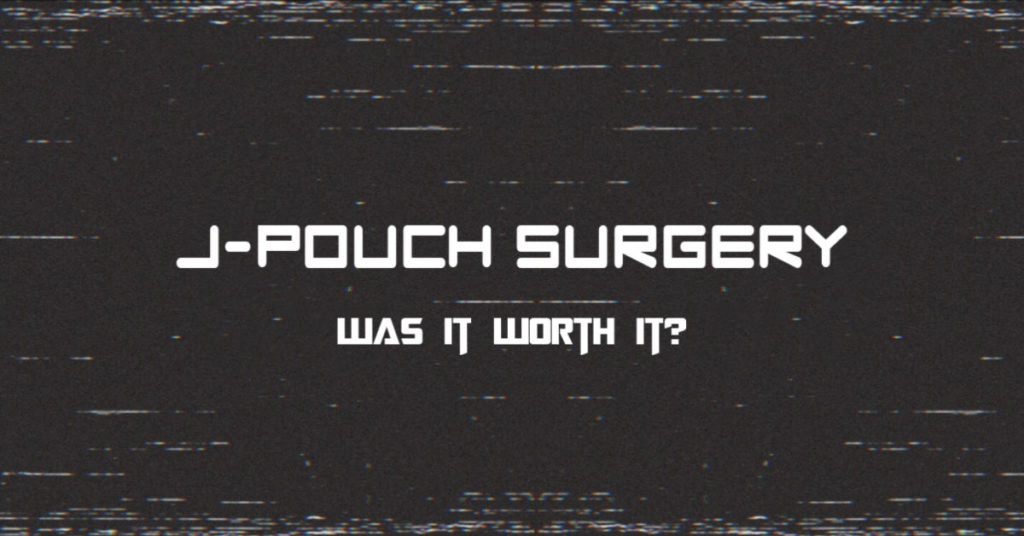 My J-pouch  gave me my life back!

Happy 3rd Birthday to me ol’ J-pouch! Three years ago today I had my takedown surgery where I said goodbye to my ileostomy and began a new life living with a J-pouch. Never in my life did I picture myself wishing a happy “Birthday” to an intestine of mine…

Off to A Rough Start: Unplanned Takedown Surgery 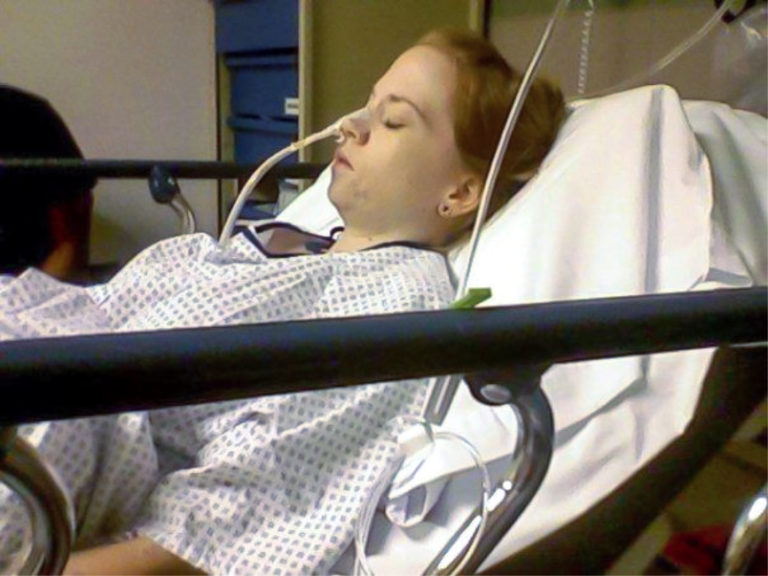 My takedown surgery did not go as planned. Actually it wasn’t planned at all. I still had at least another 2 months until I was due to have my the surgery but I had been having problems with my ostomy practically from the start that culminated in a full blockage. One day while I was in the hospital I began to have lots of bilious vomit (green bile puking). I’m talking, A LOT. I didn’t think it was possible to vomit so much fluid but go big or go home I guess? The intensity of the pain was very severe and the frequency and amount of my vomiting increased over the course of the next few hours. Every time I would throw up I was able to almost fill one of those large pink containers they give you in the hospital to vomit into.

You see, adhesions had twisted their silly selves around my gut creating a blockage. This required surgery to fix and my surgeon decided that he would just do my takedown surgery at the same time so I wouldn’t have to go through another operation again in a few weeks. He also thought it might be a good idea because I was having so many complications with my ostomy and maybe with the J-pouch hooked up things would get better. I remember being in the surgery prep room sitting on the stretcher with a bucket in my lap and in so much pain continuously throwing up more bilious vomit. All I wanted was a break from that pain and all I could think about was that I couldn’t wait until they put me to sleep. I was just so tired of suffering. I had been in the hospital since July 6th and I kept having so many complications. I just wanted all of this to be over.

Crazy that I was wishing to go under the knife just so I could take a break from my pain but I had been suffering for so long. Not just from the blockage or my previous surgery in July but also from the flare-up that resulted in all of this. I had gone for so long losing blood, having fevers, experiencing severe pain, dependent on steroids and just completely losing my life to this illness.

My J-Pouch in the Beginning

On September 10th I woke with my entire midline scar having been cut open again so my surgeon could run my bowels and do lysis of adhesions. My stoma and ostomy bag were gone and I had staples through my midline scar again and my ostomy was no longer there. Instead I had a hole in my abdomen that was packed with gauze. For the next few days it would be packed with gauze a few more times and then it was left to close up on it’s own.

My surgeon told me I could expect to be using the bathroom frequently at first. Probably around 7-10 times during the day and 1-2

times during the night until my body adjusted to the pouch. This is normal for a J-Pouch because the colon and rectum are removed so you will need to use the bathroom more often than your average healthy person who has all of their digestive organs.

Not me though! I was unable to use the bathroom much at all which was very concerning. At first they thought it was a post-op ileus but the problem has not resolved til this day so it most likely can be attributed to the motility disease that I live with in addition to having Crohn’s disease. My hospitalizations began at 10 months old and we don’t know which disease came first, my IBD or my Chronic Intesitnal Pseudo Obstruction because many symptoms that put me into the hospital could be attributed to either one. Anyway, my motility after takedown surgery was horrendous.

I spent time in the hospital trying to use the bathroom and would only be able to go once during the day (sometimes not going at all) and then I would fall asleep and have leakage and of course without a colon and with a new pouch it meant that my stool was very loose… so you can imagine.

It was important to keep the perianal area clean because the stool from a J-pouch can really break down skin if it comes in contact with it. This meant a lot of getting out of my hospital bed to clean myself up after having accidents during the night but I was so underweight and deconditioned at that time that someone else always had to help me. I was pretty embarrassed about the whole thing and it really affected my mental health. I ended up having to wear adult diapers provided by the hospital that were huge on my thin, frail body. I was so disappointed with how things were going with my J-pouch because I thought things were supposed to be getting better but it seemed like nothing was going right.

I ended up having a rectal tube inserted to drain my J-pouch since I wasn’t going to the bathroom. My surgeon had never had an IPAA patient like me before who had the issues that I did. He began calling his

colleagues at Cleveland Clinic where he trained to see if they had ever come across a situation like mine.  No one really knew what to do for me.

After takedown surgery i had complication after complication: an intra-abdominal abscess, continued vomiting and weight loss, back on TPN because of motility problems, infections, sepsis, and so forth. It took until right before Christmas until I got out of the hospital and from there I lost even more weight, down to 82 pounds because I was vomiting after almost everything I ate. In total from the time I was originally hospitalized in July it took me 6 months to get out. The most likely reason for having so many problems is that I was incredibly sick going into my surgeries. I had been on high dose steroids for over a year, was requiring blood transfusions, and was very malnourished and deconditioned. All things known to lead to worse outcomes in surgery. They couldn’t even do a colonoscopy on me safely because of how severe the disease had gotten. They tried when I got to the hospital but had to stop right away because the risk was too high.

That was 3 years ago and life was looking like it was going to be terrible. I honestly didn’t see an end in sight and I had no idea what to expect. Now my J-pouch works magically. It’s better than most J-pouches I meet, and I “meet” a lot! I only use the bathroom about 1-2 times a day on average, sometimes less and sometimes more. This is rare for a person with a J-pouch but I have a disease called Chronic Intestinal Pseudo-Obstruction (CIPO) that causes digestive tract paralysis. I have gone almost 2 weeks without using the bathroom which is insane, especially for someone without a colon. Aside from how CIPO affects me, my J-pouch itself is awesome.

I found out a few months ago that I actually have had Crohn’s disease all along which I always suspected but I was never in the care of the right kind of doctors growing up. Would you believe this… I’ve never had a colonoscopy! Only sigmoidoscopies. WTH!

For the past few years I was having a lot of trouble and just two months ago I switched doctors and was scoped and properly diagnosed with Crohn’s. I wish I had switched doctors a long time ago but I wasn’t brave enough and also health insurance issues. There was inflammation and ulceration all throughout my J-pouch and as far up as they went past the J-pouch with the scope. I was put on IV steroids, TPN for the weight loss and to have bowel rest, and then I started Remicade. I just tapered off prednisone and I will continue with Remicade. I feel a lot better now!

How my J-Pouch Improved My Life

I look forward to the future, I have hope, and I don’t see a life that is full of as many challenges as I had when I did have my large intestine. I can honestly say without a doubt that my J-pouch gave me my life back. When I had my colon I wasn’t really living, I was just existing. I had become so sick that I lost the majority of my quality of life. I was isolating myself

I wasn't really living, I was just existing

and hardly saw my loved ones anymore. I wasn’t able to attend my classes so I quitgoing to school and had to stop working. I had severe urgency which led to having accidents all of the time and I never wanted to leave the comfort of my own home (dorm room). Not to mention the pain, high fevers, arthritis, weight loss, fatigue, steroids, blood loss, and so on. Now that I have my J-pouch I have most of my life back. Things will never be perfect but they are indeed much better than before. I am able to live my life and can do so much more than I could when I had my diseased colon.

Today’s post was brought to you by the letter J.

This post was edited on 3/21/2019 for grammar and clarification as I transfer my website from Tumblr to WordPress. 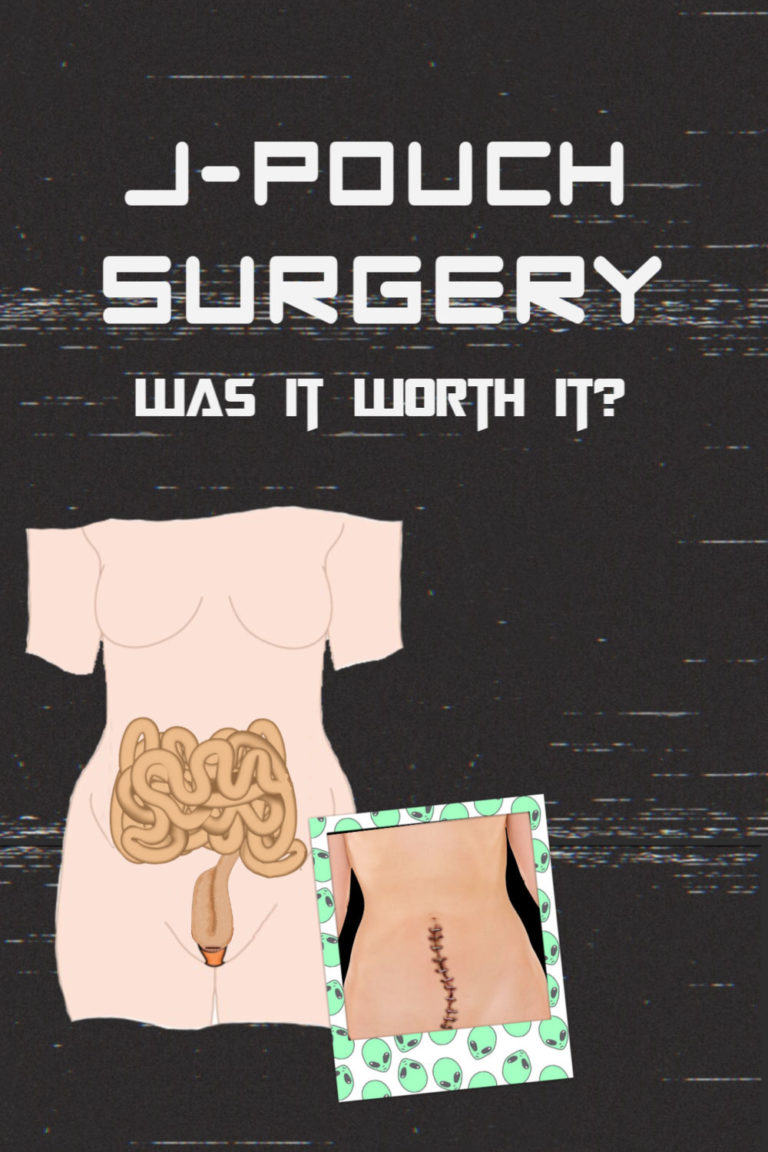